I've been playing WoW on and off for about 10 years.  My youngest child can't remember a time when I didn't play WoW.  Over this time there have been expansions I was rather Meh about and expansions I was literally on the edge of my seat waiting for.  Battle for Azeroth definitely falls into the first category.  I know only the vaguest details about it.  I am much more interested in playing Classic when it is finally released.

I'm on a break from the game right now.  There is simply too much to do and I find it overwhelming, so frankly I'd just rather not play.  Even the thought of playing invokes feelings of dread, not unlike looking at the 5 years worth of domestic paperwork that I really do need to sort and file.

And so. of course, guess who gets a first wave Beta invite for the first time ever?  That's right, this girl.  Is it enough of a carrot to lure me back?  Maybe.  Possibly.  We'll see.
Posted by Unknown at 07:12 1 comment:

This!  One Million Times This!

As a test of my desire to write again, I'm going to attempt to post the progress of a new Every-Quester.

My goal for Every-Questing is simply to complete every quest in game in zone order.  I do not count daily quests, dungeon quests, or professional quests.  Once a character has completed all regular quests I entertain the possibility of completing all dungeons (normal and heroic mode) and raids (all formats).  I either solo or duo myself (running two BNet accounts at the same time).

There is a difference in the total number of quests available depending on your choice of Faction/Race/Class.  Worgen, Goblins, Pandaren and DeathKnights all have their own unique starting areas, and only Gnomes are offered quests in Tinkertown.

For the purposes of this reboot, I have elected to play a female Dwarf Paladin.  I present you Brunhildah. 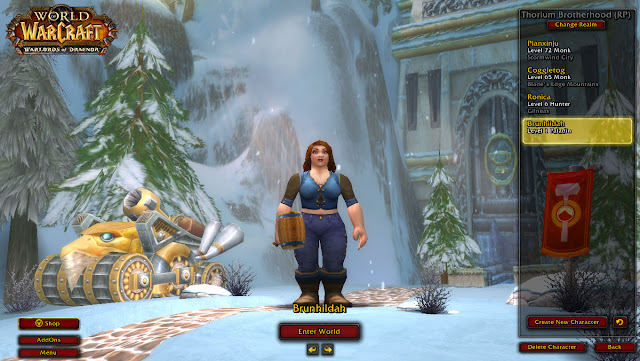 Upon creation, I guilded her into Inveniam, made her an officer, mailed her 4 Hexweave Bags and equipped full heirloom gear including a ship mission ring.  A few UI tweaks later and we were off.

I completed the Dwarven starting area, and ran the gryphon master intro quest line in Kharanos.  I also got her a port to the Shrine to set her hearth there.  I realized after the fact that I'll have to do it again because when you accept the first quest in the Draenai starting area, it resets your hearth to that location.  Ah well.

I'm going to work more on her today, and report when I've completed all the starter zones.  Once the starters are completed, I  move back to Kharanos and complete Dun Morogh, Elwynn Forest, Teldrassil and Azuremyst Island.  The next set comprises Bloodmyst Island, Darkshore, Westfall, Redridge Mountains and Loch Modan.  In this way I move back and forth from one continent to the other, completing all zones in a level range, then I move up a level range and work my way across to the other side.

I generally only quest while rested.  I don't implement this until level 10 though, as levels are simply earned too fast prior to level 10.  In this way, I expect to be level 63 or 64 (possibly higher) before I turn to Outland, level 74 or 75 when I go to Northrend, 83 or 84 for Cataclysm content.  92 for Pandaria, and likely 95 for Draenor.

From past experience I anticipate that it will take 2-3 months realtime before I have completed the level 1 - 60 content.  It may take longer since I have not previously held to requiring rested xp for play, and we are now so close to Legion and my main characters and alts will take precedence on Legion release.  It may well be this time next year before I am done questing on Brunhildah.

Anyways, here is her progress to date:

A few notes on gold:

Gold expenditure should be limited to flightpaths, mail, initial profession training, and any items I am required to purchase for questing.  Because of the unique mechanism of learning professions in Draenor, I am going to learn professions just prior to that content so that I can take advantage of that mechanism to skip having to pay for the training along the way.

I will do no gathering or crafting as I level.  All professional mats that I loot along the way will be mailed to a banker who will auction them on my behalf.  All recipes will be sent to the Inveniam banker who will see if any of my main characters need them for their collections.  If not, they will be auctioned or vendored by Brunhildah's banker.  All common or better BoEs that I loot will be checked for current value.  Anything with a value of 1k or higher will be auctioned, otherwise it will be vendored.  Any pets I loot will be kept if I do not already have 3 of them, and the extras will be deleted.  I have found that trying to sell pets is too much of a pain to be bothered with it anymore.  Non-bindable bags will be sent to the banker for banker's use, all others will be vendored.

When selecting quest rewards, I will always choose items that are upgrades to equipped non-heirlooms, otherwise I will choose the item with the highest vendor value.

I do not plan to gem or enchant any gear, and I won't glyph until I see how the new system works.  If I do require any enhancements, I'll get them from my alts, so there will be no expenditure there.

And finally, riding.  In this regard Brunhildah will have to be self-sufficient.  I don't anticipate not being able to afford training.  I will train as the skills become available to her, and as finances allow.  I may decide to run her old-school insofar as I may choose not to purchase flying until level 70 and cold-weather flying until 77, but we'll see.

"Doing it All" - The Old World

In moving all of my characters back to Azeroth proper and deciding to 'finish' each expansion with the entire group before moving on, I've created a rather large project for myself.

Some may wonder what I mean by finishing, and how precise I am going to be.  I've decided on quest completion, dungeon and raid completion, reputation capping and complete recipe collection.  They all feed into one another since there are quests in instances, rep gains in instances, and recipes are everywhere.

To assist others who may wish to follow this path, I've set down some information to help you get started and see where your road is going to take you.  For now, since this represents the next month or two of playing, we'll just look at the Old World.
Read more »
Posted by Unknown at 13:21 1 comment:

I just read this reply to a thread on a forum I belong to.  I nearly spat out my tea when I read it.  Thanks for the laugh, Z-Man.

They can't be reasoned with - they're righteous and you're evil. The only option is to brimstone the entire server - orphans and all - to convince them that maybe civilization saving would be more successful somewhere else."

Planning My Life Behind the Curve

I've begun my new life as a has-been in earnest and turned my back on the dung-hill that is Draenor.  The first act was to move everyone back to Stormwind and delete their Garrison Hearthstones.  Then I hit the bank and socked away everything Warlords related - all the follower upgrade tokens, the crafting mats etc - and wham, instant bag space.  Then I hotkeyed a flying mount back into it's accustomed slot and whoo hoo, to the skies baby!