Yesterday a chap named Itchyscratch posted a thread on the official forum that resonated with me.  I quote in part:


"A friend of mine messaged me in a huff a couple of hours ago to tell me that flying wouldn't make a comeback in 6.2... or, allegedly, ever again. we discussed the topic at length, along with several of the very perplexing design choices that Blizzard has implemented throughout WoD (Mostly involving Garrisons and the general lack of lvl 100 content, but I won't bore anyone with the details since they've been discussed to death many times over) Before he left to get to work, he ended the conversation with "I just can't believe all of this. It's almost as if they're TRYING to make WoW worse, or something."


This strangely resonated with me.  Everything got thrown into sharp relief.  Black turned into white, and the picture of a white candlestick on a black background suddenly turned into a picture of two black profiles on a white background. 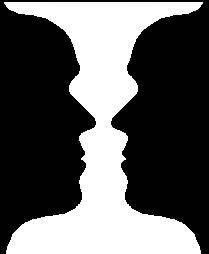 I ended the quote above where I did because I disagree with his line of reasoning.  It makes no sense.  But the question remains.  What if all of this is completely intentional?

A lot of us have been cruising along, observing, thinking (I am sure) that the lunatics where in charge of the asylum because there seems to be no rhyme or reason for the design choices made this go round.  A ton of newer and widely appreciated features have been removed and just for kicks some whimsical and nonsensical features have been introduced (twitter integration and selfies).


It's a pretty long list summing up what we've all noticed.  As always the question is "Why".  Why has all of this been removed?  We've seen the pendulum swing before, but design is not capricious.  There has to be a 'why'.

Let's examine some other things.

It is indisputable that the current and ongoing investment in WoW on the part of Blizzard is huge.  They have a larger staff than ever before.


There is a very large, very expensive movie in the works, directed by an impressive director, with the score being done by Game of Thrones'  Ramin Djawadi.  The movie most recently received PR by article in Time Magazine.  It is due for release in the summer of 2016, just a couple of months before it would be logical for 7.0 to drop.  The focus is on Orcs and Humans, not the Burning Crusade, not Arthas, not Draenai or Blood Elves, not Illidan.

And lets not forget Time's Square: 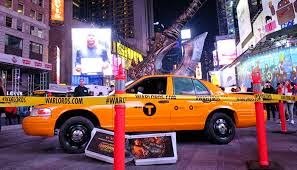 This was not cheap.

Neither was this little display in Shanghai: 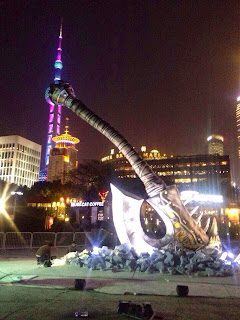 So, to those who think that Blizzard is in the process of moving resources away from WoW to focus more on Overwatch or Hearthstone, I would say you've got the wrong end of the stick.  There has simply been too much money spent recently to leap to the conclusion that the end is nigh.  There is something in the works.  Something big.  Something that requires a larger staff.  Something that will make all the seemingly crazy design choices suddenly make sense.

I smell a reset. Let's throw a few puzzle pieces together.

It's long been agreed that the nothing external can kill WoW.  This behemoth can only be brought down by itself.  But how would it accomplish that feat?  Well, apathy or one, or bleeding resources off to slowly reduce the scope of the game.  The overwhelming Bleh that is Warlords would seem to support the supposition that we are currently witnessing this very thing.  But why would so much money be spent to hype and support a product in the process of being killed?  That makes no sense.  You don't double your staff for, spend a truckload of cash on, and make a movie for the product you are going to turn around and ignore, unless you are completely insane, and I don't for a moment think anyone in Irvine is utterly beyond the bend, so I think we can safely dismiss the idea that Blizzard is in the process of putting the game writ large into maintenance mode.

We are at level cap 100, an not insignificant number.  (Edit: And we got two expansion in a row with a level cap increase of only 5 levels to bring us to level 100 on the occasion of the 10th anniversary of the game).  We are now in an alternate universe, beyond the pages of the storyline set out in Warcraft 1 through 3.  There is precious little to do in Draenor at cap, enough to maintain interest for a few months at best.  They are getting us accustomed to no longer having certain features as detailed in the list above - items 1 through 8 certainly did not exist in the original WoW.

Then there is the 'original' game outline of legend which has been widely debunked, but hey, things that were once thought only ideas of fancy or imagination have been eventually proven true.  Stranger things have happened. 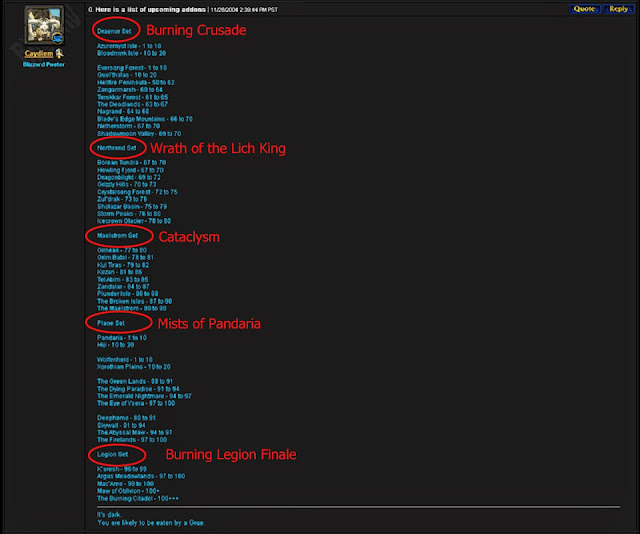 We are at a point where it is possible to splinter WoW into WoW 1 and WoW 2.  Putting our characters into an alternate universe makes it possible to send us back through the Dark Portal to an alternate version of Azeroth, perhaps an Emerald Dream version of Azeroth;  one we have to build perhaps;  one in which Orcs and Humans are again the main focus of the story: a version of Azeroth without flying, badges, scenarios, 10 man raiding, reforging, daily quest hubs, guild perks or leveling, bloated talent trees and ability sets, portals to everywhere, etc, etc.  Sound familiar?

So if you're going to splinter WoW how do you accomplish the seemingly impossible: getting players to invest themselves in the new game when so many of us are emotionally and psychologically invested in our characters?  Well you start by making the endgame of the 1.0 version unenticing to spend much more time in, and you provide a mechanism to move their existing characters over to the new world.  We could march back through the Dark Portal to find ourselves not on our own familiar Azeroth but on Alternate Universe Azeroth.  This gives the devs a completely clean slate.  Instead of the old familiar trick of giving us a new continent to work our way through, we have an entire world of who knows what waiting for us.  They could make the Dark Portal a one way trip if they wanted to let us take our characters to WoW2 irrevocably, or two way to let us play in both games with the same characters.

Or the worlds could be severed and we could be presented with the scenario of waking up the in the AU Azeroth fresh and shiny (but still ourselves), ready for adventure in this familiar but new world while still having the original version of ourselves back there on Draenor.

The possibilities are endless, and I am definitely reading the signs as pointing to something rather more revolutionary than another 'here's a new continent' expansion for 7.0.  I am scenting WoW2 in the wind because frankly, that's the only thing that makes sense.

Either way, Blizzcon is going to be very very interesting this year.  I shall be glued to my screen, virtual ticket in hand because I am very certain that a very large rabbit is going to be drawn out of the hat.

Cheers,
Eccentrica
Posted by Unknown at 13:08